Four Seasons involves employees and guests in the common goal of preserving and protecting the planet. We engage in sustainable practices that conserve natural resources and reduce environmental impact. As importantly, sustainable tourism will enhance and protect the destinations where Four Seasons operates for generations to come. 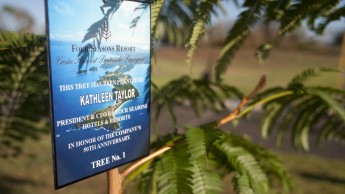 Planting 10 Million Trees Around the World

Four Seasons has always strived to involve employees and guests in the common goal of preserving and protecting the planet.

Four Seasons is making it easy to host environmentally friendly events with a new sustainability program. Available at all 85 hotels and resorts worldwide, the new Greening Meetings program allows meeting planners to choose services that best suit the desires of your group, including measures to conserve water, recycle, donate materials and reduce your carbon footprint. Your journey to green meetings starts here.

Ginger likes to spend summers on the sunny beaches of Nevis. In the fall, instead of jetting back to a home in the north, she dives down beneath the waters of Montserrat, to the south-east. As a metre-long hawksbill turtle, Ginger spends 90 per cent of her life underwater. We know this because her movements have been tracked since 2007 when she was tagged as part of the Eastern Caribbean Hawksbill Tracking and Conservation Project.

Remembering the Elephants in Thailand

Many first-time visitors to Thailand are shocked to see elephants and their owners begging on the busy streets of Bangkok. Elephants are very expensive to keep and their handlers – known as mahouts – often take them from the jungle into urban centres to beg for money from tourists.

Revitalising the Alexandra Canal in Singapore

Staff from The Regent Singapore, A Four Seasons Hotel are quite accustomed to beautifying things so it’s no surprise that they jumped on board to help revitalize the Alexandra Canal.

Supporting the Olympic Games in Whistler

Four Seasons Resort Whistler helped the 2010 Vancouver Olympics win the title of greenest games ever. How? By donating its emission credits. When the Resort switched to an…

Serving up a Local Menu in Hualalai

Call it farm-to-table eating, locavorism or the 100-mile diet – more and more people are eating up the concept of a local diet. It’s no surprise either.

Taking Local to the Next Level in Atlanta’s Garden Oasis

For Executive Chef Robert Gerstenecker, the sky is the limit – literally. In 2009, he converted the fifth floor terrace at Four Seasons Hotel Atlanta into a garden oasis for local produce and herbs.

Manta Rays are a Researcher’s Muse in the Maldives

When it comes to being photographed, manta rays in the Maldives may rival some of Hollywood’s favourite celebrities.