Four Seasons is committed to being a responsible and caring community partner by having a positive economic impact and supporting community goals, both within and outside the hotel. We engage in innovative training and mentoring programmes for young people, support those in need and celebrate the diverse cultures where Four Seasons operates. 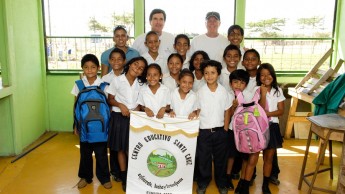 Discover how a meeting or event at Four Seasons can leave a lasting impression on your attendees, as well as the local community.

Growing Together: Voluntourism in Costa Rica

Four Seasons Resort Costa Rica at Peninsula Papagayo is on a mission to provide textbooks for every student in its community. The Resort launched Books for All (Libros Para Todos) and guests and employees have been generously donating funds.

In 1995, Four Seasons Hotel Boston began the Teddy Bear Tea to celebrate the spirit of giving and to brighten up the holidays for children less fortunate. Almost two decades later, the Teddy Bear Tea is still going strong and brewing up holiday cheer.

Passing on the Gift of Knowledge in the Maldives

Four Seasons Resorts Maldives are committed to helping young Maldivians broaden their prospects for the future. The Resorts offer a one-year Four Seasons Apprenticeship Programme to promising youth between the ages of 17 and 20.

Spreading Happiness to Orphans in Jakarta

At Four Seasons Hotel Jakarta, local orphans are considered part of the family. During Ramadan and Christmas, two major religious holidays observed in Indonesia, the Hotel gathers presents and donations to provide the children with food, clothing and a little cheer.

The world watched in horror as reports of the recent earthquake and tsunami in Japan travelled across the globe.

Hosting Thanksgiving on the Mayflower in Washington

Thanksgiving is a time to show gratitude for the people and things we appreciate most in life. And every year, Four Seasons Hotel Washington, DC does just that by honouring the City’s police officers, fire fighters and emergency room workers.

The opportunity to eat a five course meal prepared by five of the best chefs in a city does not present itself every day – but it does happen once a year at Four Seasons Hotel Sydney. For more than 20 years, the Hotel has hosted and sponsored the “Five Chefs Dinner” to raise money for the Starlight Children’s Foundation.