FOUR SEASONS OF PROGRESS
Four Seasons is committed to supporting both local efforts and broader campaigns whose goal is the eradication of cancer. Through the collective efforts of the company’s hotels worldwide, Four Seasons annually raises significant funds and awareness for cancer research. 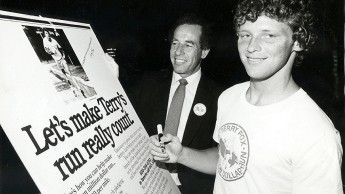 Marathon of Hope Continues Around the World

For more than 30 years, Four Seasons has been deeply committed to the cause of advancing cancer research.

Supporting Cancer Research and the Parkway Run in Philadelphia

For staff at Four Seasons Hotel Philadelphia, the last Sunday in the month of September marks a very important event. Every year on this particular day, Four Seasons employees – alongside thousands of Philadelphians – dust off their running shoes for the annual Parkway Run/Family Fun Walk.

The Terry Fox Marathon of Hope Continues in Doha

Terry Fox is long remembered for his brave marathon across Canada to raise money for cancer research. Although his story began in Canada, his name and spirit lives on around the world.

Boston is known for the Marathon, but there’s another race that's near and dear to the City’s heart. For the past 25 years, Four Seasons Hotel Boston has hosted the Run of Hope to raise funds for pediatric cancer care at Massachusetts General Hospital for Children.

Running for Gus in Chicago

Gus Evangelides passed away from a malignant brain tumour just before his second birthday in April, 1995 but his story has remained in the minds and hearts of the community.

Drive Fore the Cure is a Swinging Success in Washington

A swinging golf club can be a powerful weapon, especially when used to raise money to advance cancer research. That’s why for the past decade, Four Seasons Hotel Washington, DC has been organizing “Drive Fore the Cure,” an annual golf tournament to raise money for Washington Cancer Institute.

It began as a small event with only 300 runners but 17 years later, the Run for Hope in Singapore (formerly organised as the Terry Fox Run) has grown into an annual community affair with close to 6,500 participants.

Run for Hope Makes its Mark in Macau

When Four Seasons Hotel Macao opened in 2008, it hit the ground running – literally – to help advance cancer research. The Hotel hosts an annual Run for Hope for the community and participants can choose from a 5-kilometre running course or a 3-kilometre friendly walk.